Decentralized cryptocurrency exchanges are aimed at solving problems that are inherent in centralized exchanges. They create p2p markets directly on the blockchain, which allows traders to independently store and operate funds. Users of such exchanges can make transactions with cryptocurrency directly between each other — i.e., without third-party involvement.

Decentralized services are supervised either automatically or by the participants. The safety of assets is provided by a distributed ledger technology (DLT) — in general, mostly the following blockchains are utilized for DEXs: Ethereum (EtherDelta, IDEX, etc.), Graphene (BitShares, CryptoBridge, etc.) or blockchains powered by other cryptocurrencies (Waves, Switcheo, etc.). 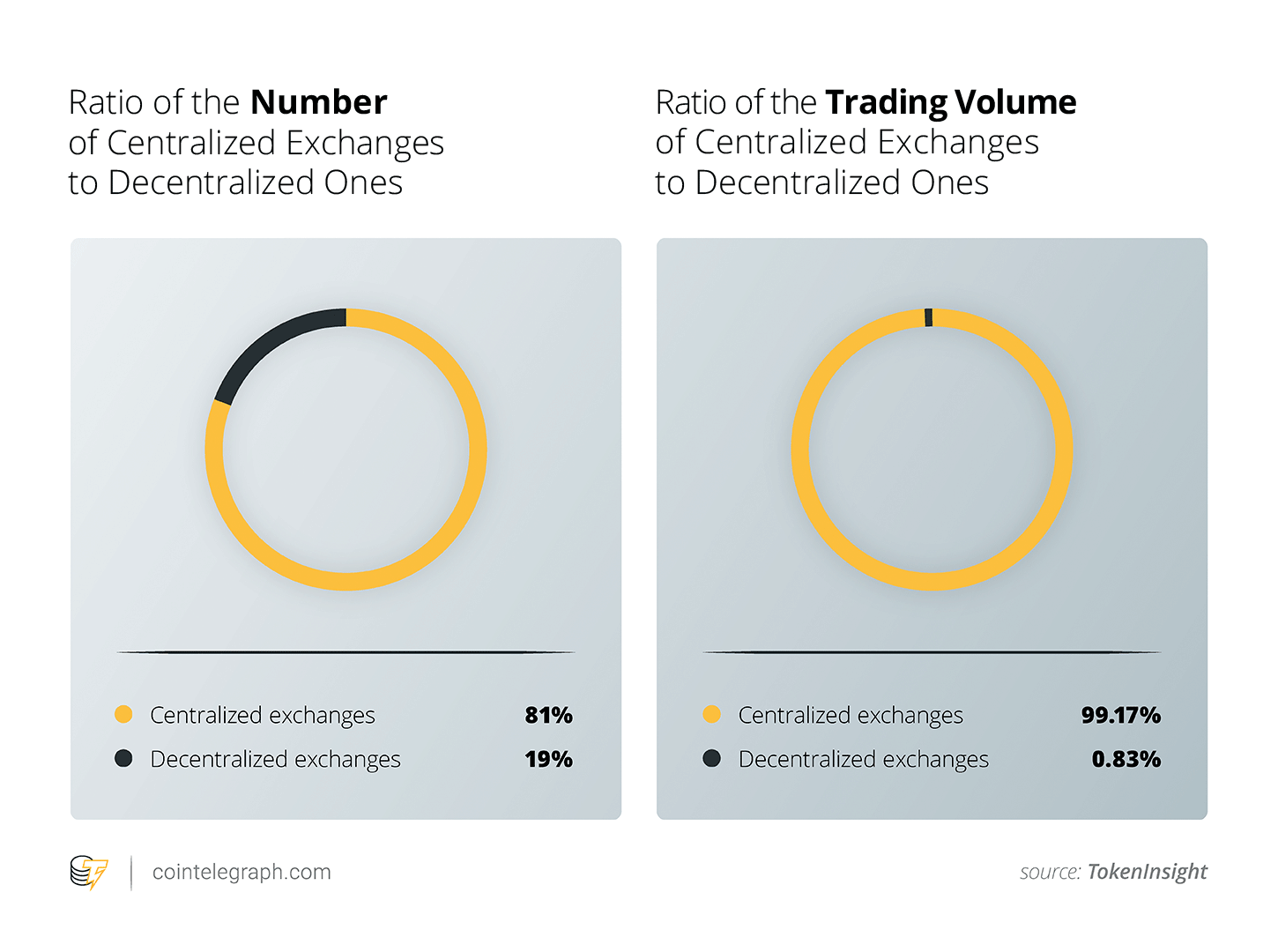 Centralized — users must be identified, and their coins are kept in the accounts belonging to companies. Decentralized exchanges do the exact opposite.

Centralized exchanges are managed by a specific company or a person focused on making a profit. Such exchanges are responsible for protecting user data and their trading information. They fully control the platform’s operation and independently make decisions that are important for the development of the service. 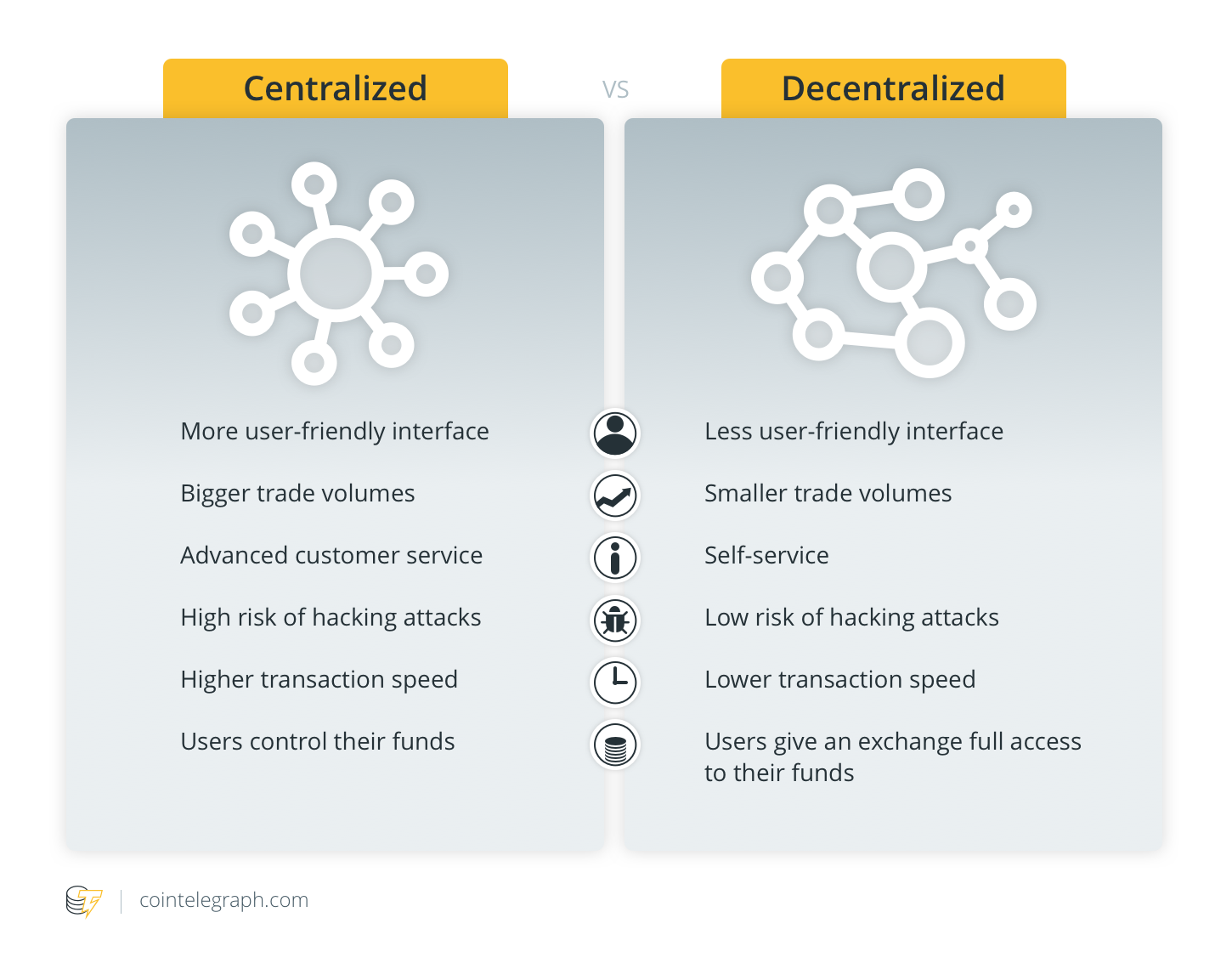 Decentralized exchanges, in contrast, are managed automatically or semi-automatically with the involvement of platform participants in the process of making important decisions. Such platforms provide the technical possibility of direct interaction between the participants and use a distributed registry for storing and processing all — or almost all — data. A decentralized exchange does not store funds or users’ personal data on its servers and serves only as a platform for finding matches for the purpose of buying or selling.

What are the advantages of decentralized exchanges?

Most of the strengths of decentralized exchanges stem from their distributed architecture and the lack of a single control center.

Security: Decentralized exchanges do not store user assets. Therefore, neither hacker attacks nor the total collapse of the exchange can lead to a loss of funds. The absence of a single entry point, through which one could gain access to all assets and data, complicates work for hackers and makes an attack meaningless in itself, which radically distinguishes decentralized exchanges from centralized ones that are regularly hacked.

Low risk of manipulation: Another advantage of this kind of service is the minimal risk of price manipulation or falsification of trade volumes, due to the absence of a central structure that is interested in manipulation inside the exchange.

There are no personal accounts on the decentralized exchange, no verification is required and there is no need to even specify an email address, so personal data of users cannot be stolen. This structure makes services based on a distributed registry more anonymous than exchanges that require personal authentication for the purposes of Know Your Customer (KYC) and Anti-Money Laundering (AML) compliance.

Independence from regulators: The distributed architecture protects the exchange from interference by local or international authorities. In the case of a centralized structures, following regulations means that the exchange service can be either completely blocked or partially, in which case the service becomes limited in terms of location or options.

Accessibility for different projects: In contrast to its centralized brother, a decentralized exchange makes it possible not only to place orders for existing cryptocurrencies, but also to create new ones directly in the system. This allows startup projects to provide minimal liquidity, without having to pay high fees for placement on major platforms.

Are there any disadvantages to decentralized exchanges?

The distributed architecture of decentralized exchanges and full user control over their own funds entails a number of difficulties.

Inability to restore access: For example, due to lack of a KYC process and the ability to cancel a transaction in the event of a broken passwords or loss of a private key, the user cannot recover his or her data and return the assets. Chargeback and refund procedures are incompatible with a distributed registry. Users who have committed an operation by mistake or have lost control over their keys are not able to recover their access.

Small set of options: Many options for traders, such as stop loss, margin trading or lending, are not available for users of most DEXs. Since many decentralized exchanges are managed by smart contracts, cryptocurrencies that do not support interaction with smart contracts cannot bargain on them.

Low liquidity: Decentralized exchanges usually have a much smaller pool of liquidity compared to centralized sites. Thus, while Bitshares DEX has a daily volume of 197 BTC, the same parameter in Binance reaches 227,123 BTC. 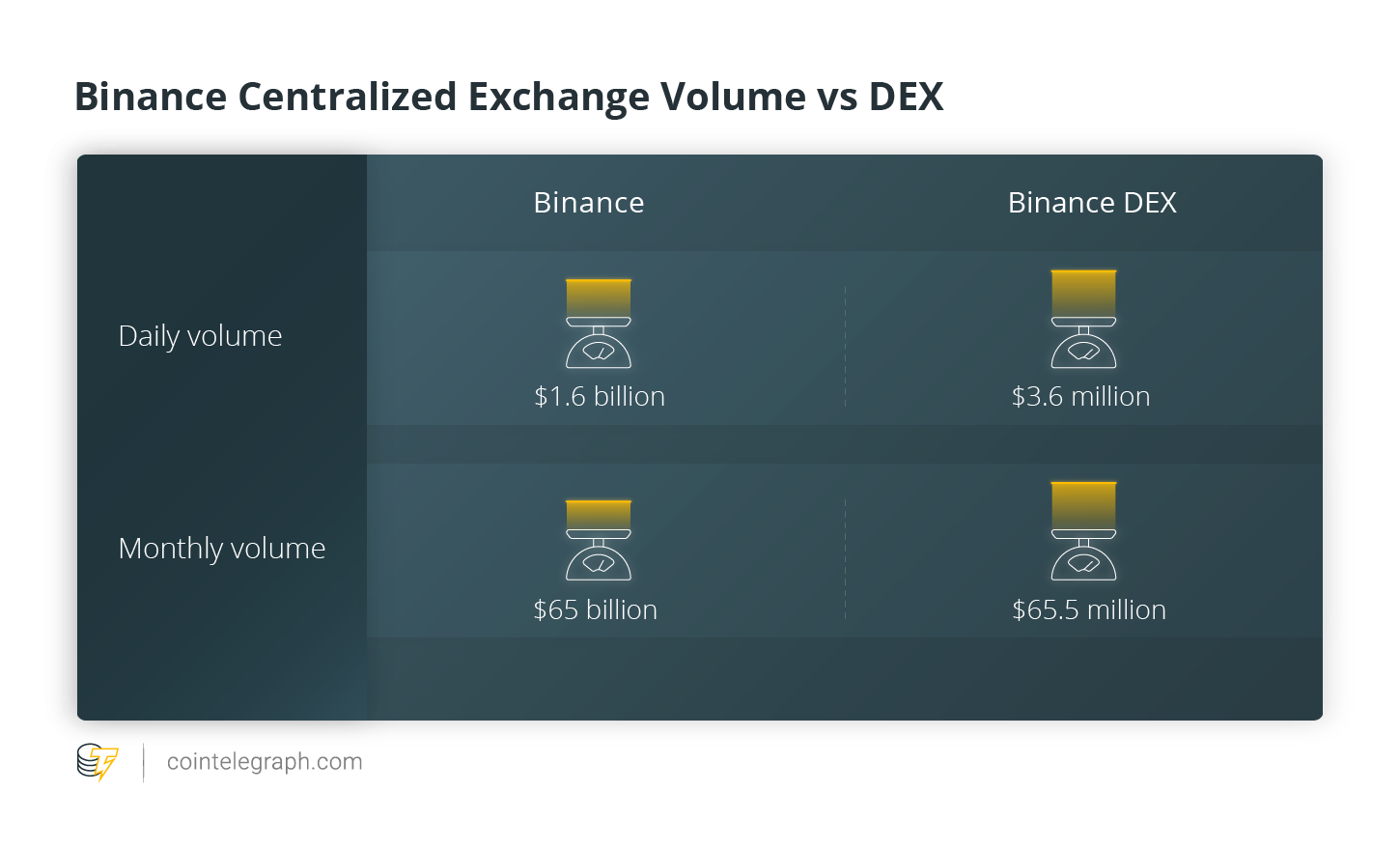 Such a difference is caused by the fact that traders prefer centralized services, where the choice of instruments, currency pairs and orders themselves are much greater than on a DEX. As a result, the decentralized service falls into the so-called vicious circle — i.e., there are few users due to low liquidity, while the achievement of liquidity is impossible without a large number of traders.

Scalability issues: An influx of a large number of people who wish to trade cryptocurrencies will almost inevitably cause a large load on the network and may cause delays, an increase in commissions and all other problems already familiar from stories with centralized exchanges.

No support service: A decentralized exchange, by definition, cannot have a support service that can handle transactions or user accounts. When choosing such an exchange for trading digital money, the user is fully responsible for their funds and, in the event of losing a private key or sending a wrong transaction, they cannot apply for qualified assistance. The lack of advance support service also means that a dramatic increase in the number of user requests may lead to difficulties with scalability, and an operator response time may increase in the event of technical problems.

Limited speed: Transactions take time to be checked and confirmed on a blockchain, and the processing time does not depend on the exchange, but on the miners. Since DEXs are less popular than their centralized analogues, users may face difficulty finding someone to match their buy or sell orders — or with making a deal at a good price. Buying or selling new currencies or those with low trading volumes can be even more difficult.

I have never used a DEX, but I trade on Bittrex and Huobi. Is it difficult to start?

Decentralized exchanges are more complicated and require studying some technical aspects, which are partially associated with the disadvantages described above.

The majority of DEXs operate on the Ethereum platform as a decentralized autonomous organization (DAO) or a decentralized application (DApp), which use Ethereum smart contracts and blockchain. This means that transactions must be paid with gas and the user must know what value should be chosen in order for the transaction not to stall and be processed on time. 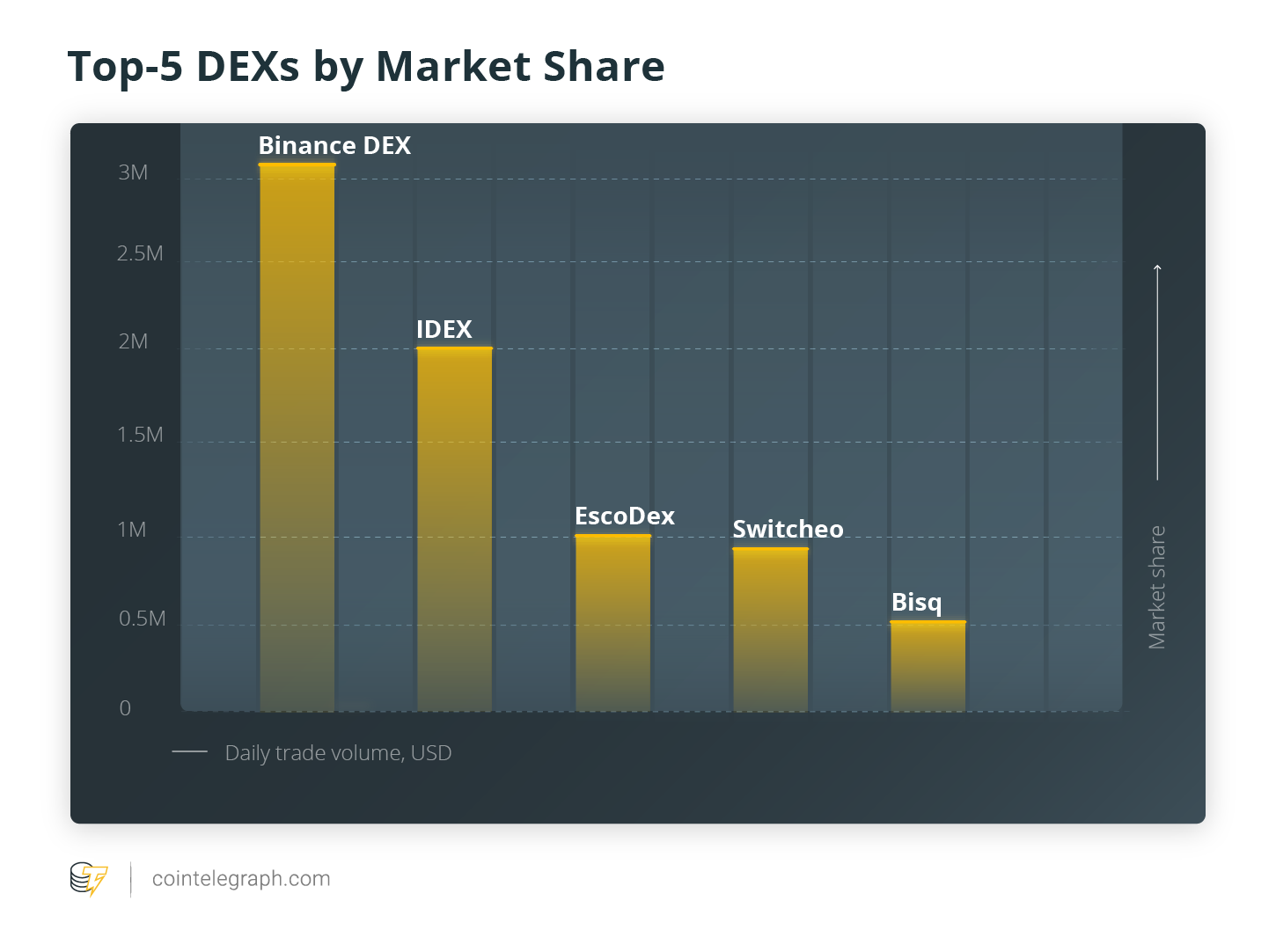 The principles of placing orders are also somewhat different that what users of centralized services might be used to. The trading system mechanisms communicate between orders in accordance with the queue. All transactions are personally signed by users through their private keys without the participation of the exchange.

Some exchanges issue their own tokens that perform different roles in the functioning of the system — from paying a commission to investing in a project. For example, on the Waves platform, popular currencies as bitcoin (BTC), ether (ETH) and litecoin (LTC) are traded in pair with the internal asset WAVES, which is also used to pay commissions and other payments.

Users may also experience slower operation times when trading on a decentralized site. The reason is a time delay between when a blockchain transaction is made and when it is validated.

Can an exchange be completely decentralized?

Most of the existing exchanges that call themselves decentralized, in fact, are not fully so.

The simple fact is that many DEXs use their own servers to store trading data and applications for the purchase or sale of user assets, but the private keys are kept by the users themselves.

Therefore, decentralized exchanges have centralized components that make it possible for a government to control how they operate. A notable example is the IDEX exchange, which prohibits the residents of the state of New York from trading on the platform.

For the same reason, some exchanges may be subject to hacking and attacks. Charlie Lee, the creator of Litecoin, said that the exchange cannot be decentralized if it can lose or freeze the funds of its customers. The message appeared in his Twitter after the Bancor decentralized exchange was reportedly hacked on July 9, 2018 and lost $13.5 million worth of assets.

A Bancor wallet got hacked and that wallet has the ability to steal coins out of their own smart contracts. ?‍♂️

The main issue when talking about regulation of DEXs is that, in most cases, such exchanges are not controlled by a specific legal entity or individual.

Since DEXs are not required to follow regulations, this results in problems with the determination of those responsible in the event of any violation, difficulties with checking trading activity or identifying possible infringements. For the same reason, some already existing rules applicable to centralized exchanges cannot be applied to decentralized exchanges.

In the United States, regulators are trying to apply a legislative base that already exists, and in Singapore, the authorities are trying to create a new regulatory framework for such exchanges. However, there is no unambiguous position regarding DEXs in these countries, while in other countries, decentralized exchanges are not regulated at all.

THIS IS AN EUROPEAN ECOSYSTEM OF INNOVATION PROMOTING

OUR EUROPEAN MOTTO AIMS TO PROMOTE

to advice european entrepreneurs ( from SMEs to NGOs) & global investors.

to manage a portfolio of european technologies with global and local impacts.

to invest in talent recruitment & management.

So what is a platform?

A platform is a plug-and-play business model that allows multiple participants (producers and consumers) to connect to it, interact with each other and create and exchange value.